As you have all probably heard by now, the Apple iPhone will be at Cingular/AT&T stores near you on June 29th (which happens to be my name day, it's a European thing). If you haven't had a chance to check out the new advertisements, I'd recommend it. They briefly go through all of the iPhone's features.

You'd think that as an Apple-crazed tech guy I would be all over the iPhone. Unfortunately, there are a few reasons stopping me from considering the iPhone as my personal phone/Internet device of choice. First off, when reviewing the Sprint UpStage, which relies on a touch-sensitive navigation pad, I got a strong feeling that the iPhone's touch-screen only UI would get annoying. I thrive on tactile feedback from buttons and don't think I'd be typing as fast as I could than with a QWERTY keypad.

Secondly, the iPhone although sporting an "blemish-resistant" screen will no doubt become like my iPod in a few weeks with me: scratch-ridden and fingerprint-laden. The iPhone's form factor is a tad on the large side for me and with phones that large I feel like I'm holding up a tile to my head. Also, the iPhone doesn't support third-party apps or 3G in its current revision - and the battery is not user-replaceable. We all know what happened with the first iPods and their batteries. Speaking of batteries, the iPhone is expected to have (far) less than stellar battery life.

Just to put this out there - I am slightly biased as I mentioned at the end of my BlackBerry/Google Maps post. I've always had small phones that are so light I have to pat my pockets down to make sure I even have it with me. Regarding the pricing of the iPhone, I wish Apple sold a cheaper iPhone lacking the iPod capabilities... pretty much just a phone and Internet device. But this is Apple and they know people will pay the higher price anyway.

The bottom line is the iPhone doesn't have a keypad; that's my deal-breaker. It might not affect you as much but I like being able to use my phone without needing to look at it and knowing that I hit the right button instead of hitting between the buttons as is likely with the iPhone.

I will say this though, things might be completely different once I get my hands on an iPhone and start playing around with it. But that's later and this is now.

Tomorrow I'll be going back on my word and giving the BlackBerry Curve a whirl. I almost had one on Friday but after waiting for an hour at the Cingular store, having my money out and giving my info they told me the only Curve they had was on hold by someone else. Hopefully, there will be some in stock tomorrow. 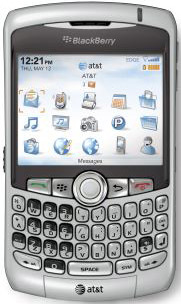 As of recently, I've found myself checking email with my cell phone much more while out/on campus/in class as well as text messaging (twitter...).

Here are my main reasons for the BlackBerry Curve: smaller and lighter than most (all?) QWERTY smart phones, support for the GMail for your domain app, good battery life, backlit QWERTY keyboard and it only costs 199 vs 499/599 for the iPhone.

On the plus side, the Curve delivered excellent endurance on our tests, with the battery lasting four days with periodic use.
Laptop Mag