Google has just updated their web-based RSS aggregator, Reader, and guess what.. it's actually usable. I really could not stand the first version Google Reader, which was launched almost 1 year ago. The recent update brings the user interface design up to par with Gmail's offerings. 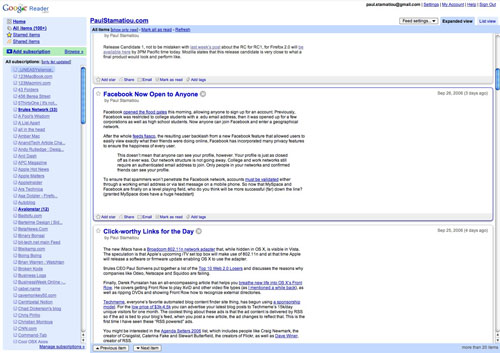 Of the most basic features comes OPML import and export which works well and was able to quickly import some 180 feeds of mine. In addition there is the ability to tag, share and star specific items from your feeds. However, for me the best part is list view allowing you to quickly scan headlines with brief article previews.

With this Reader update, Google is emphasizing that Reader is your "inbox for the web," bringing in the whole email concept which should make the RSS aggregator idea easier for new users to grok. Unfortunately, Google Reader is aimed at just that, new users. Feed enthusiasts far and wide won't find any of the features in Google Reader that they've become so accustomed to in NetNewsWire or NewsFire.