While inflight Internet access isn't anything new, especially to airlines like Virgin America and JetBlue, I finally got my first whiff of it this past weekend on an Airtran flight. The particular Boeing 717-200 I flew on this past Friday, like many planes in the Airtran fleet (and some planes with American, Delta, Virgin America, Air Canada and United), was equipped with inflight Internet access provided by Aircell's Gogo. While I would be happy with any Internet connection while up in the sky, Gogo's offerings had me rather smitten and provided a comfortable browsing experience. 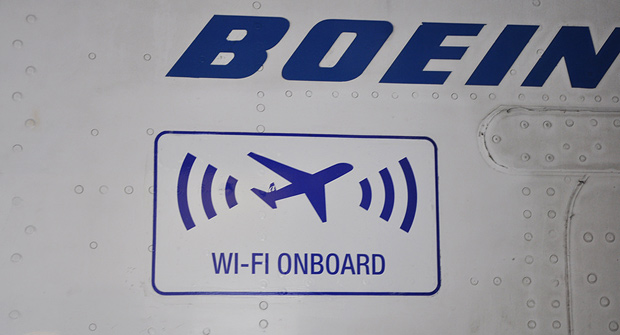 While boarding the plane, there are a few not-so-subtle clues that this plane isn't your ordinary people mover.

Before I talk about the pricing or performance of Gogo's inflight Internet access, I figure I'll mention how it's done. First off, it's a high-power EVDO Revison A connection with a theoretical max of 3.6Mbps downstream and 1.8Mbps upstream. But your typical EVDO won't work in an airplane. Aircell owns its own set of cell towers (92 are in operation throughout North America now) specifically designed for the task at hand, with data transmissions pointed upwards. Each tower operates a roughly 350 mile radius (hopefully your flight path from say Houston to Miami isn't too far away from the land-based Aircell towers) and can communicate with airplanes flying up to 500 miles per hour. The belly of the plane is equipped with a transceiver and then feeds the data to an onboard system piping everything out to an open Wi-Fi network. 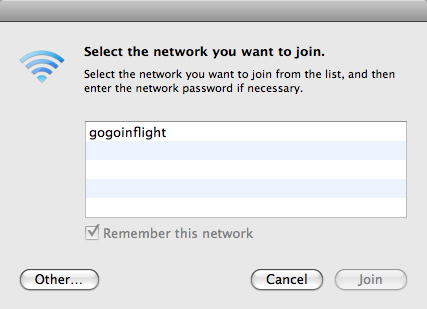 As such, Gogo claims there might be increased latency and potential network drops as the plane moves between cell towers or goes low enough before landing so as to hinder cell tower communication.

Depending on the length of your flight, Gogo service costs either 10 or 13 (flights over 3 hours). Getting setup is pretty much as you would expect. Connect to the Wi-Fi network, browse to any website and get redirected to a Gogo portal prompting you to create an account/sign in and pay up. 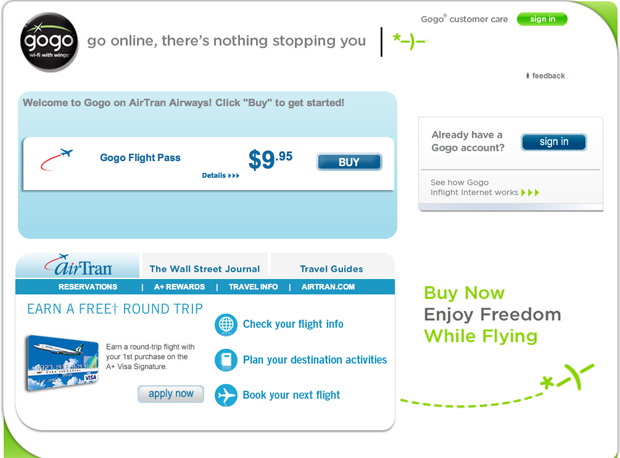 And now for the oh so precious bandwidth numbers:

Naturally, I was the first to turn on my laptop before I was supposed to and connect to the network so I can say with some confidence that this test was run with only me using the inflight Internet connection. I ran a few other speed tests later in the flight after I assumed others would have signed on as well, especially for my particular flight where many people were given free passes for Gogo service. Subsequent bandwidth tests produced figures around 1.52 Mbps down and 0.28 Mbps up with a slightly higher ping of 150ms.

Bottom line, I was successfully able to carry out a typical Web browsing session without any frustrating delays or other such issues associated with dodgy Internet connections. I had music playing from Hype Machine at times and streaming from iTunes radio other times without issue and was even able to load several YouTube videos. That brings up another point. How is Gogo going to handle bandwidth-crazed users? For one, the plane is equipped with a traffic shaper, so high-bandwidth users are limited unless they are the single one using the service. Second, Gogo ensures that low-bandwidth tasks like simple Web browsing take precedence over higher bandwidth and streaming activities. Also, some may find that their VoIP or video chat service of choice is blocked. That's also a plane convenience issue in addition to a network hogging issue — imagine if people around you were just chatting away during the whole flight. That could get annoying. And finally, some sites are blocked, presumably both for content reasons and bandwidth issues: 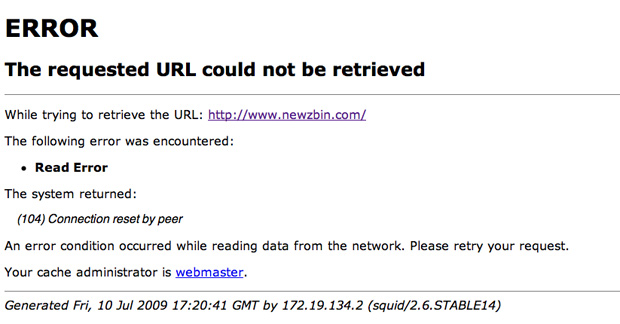 An example of a site blocked by Gogo, using Squid (proxy server and web cache daemon).

However, I was able to fire up a working BitTorrent session, TPB loaded up and I was even able to start a Usenet download, so Gogo is still likely in the midst of changing things. Of course, I was just testing things out and didn't sustain any obnoxious downloads for any length of time.

Overall I was very happy with my Gogo Inflight Internet experience. I was able to get work done just as if I was anywhere else. Not quite enough bandwidth to have fun but definitely enough to get by. This brings up another question I have had in my mind for a while. Is Wi-Fi on airplanes a good thing? Planes used to be the only place that separated you from the Internet and it was quite relaxing, personally forcing me at least to get some reading done, or focus on a single task at hand without other online distractions so ubiquitous in this wired ADD age.

I think that inflight internet services will only be something for the business person or diehard techie than the casual surfer. A little network prodding (I used nmap) proved this theory on my flight. Halfway through the flight, I was the only person on the network. Speaking of network security, the Gogoinflight wireless network is open and unencrypted, offering no link layer security. An experienced user and a free network protocol analyzer like Wireshark is really all that stands between other Gogo users and their security and privacy. If Gogo just upped the Wi-Fi network to WPA2 this problem wouldn't exist.

What do you think — is Wi-Fi on flights a great thing or another burden? Have you used Wi-Fi on any flights before? What was your experience like?