There's a new kid on the block when it comes to web-based applications for creatives. It's called Aviary and I don't believe I have ever seen anything like it. Aviary is soon to become a powerful brand. They are developing a massive suite of such Adobe Flex-based applications. I first heard about Aviary through a Skribit suggestion on my blog many months ago. Aviary has since opened a few applications like Phoenix (image editing) and Peacock (pattern maker) to beta testers and many more are in the works. 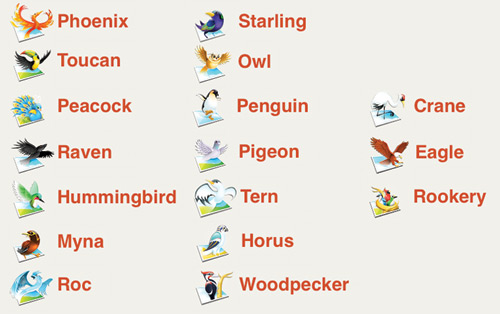 Each application totes an imaginative name and icon related to some type of bird. They deal with everything from "image editing to typography to music to 3D to video." In addition, the main site A.viary.com creates a community around users sharing their creations, as well as the source files so others can tinker. That's something I would come to expect from the Worth1000 team that has previously built a popular site based around community interaction with events like Photoshop contests. 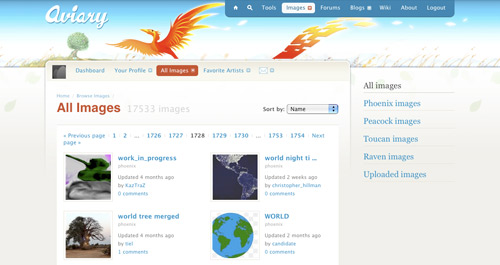 Since each application is created in Adobe Flex, users will be able to download applications and use them locally through the Adobe AIR platform.

Phoenix is Aviary's flagship image editing application. At first glance it's not too far away from a simple Photoshop-like editor. Menus are where you would expect them to be and tools are familiar. Beyond that, Aviary's products shouldn't be compared to Adobe's offerings. They are more of a creative outlet than just a tool. 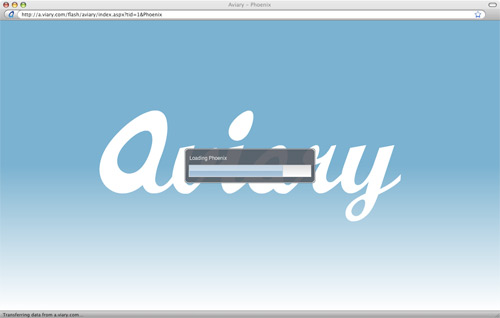 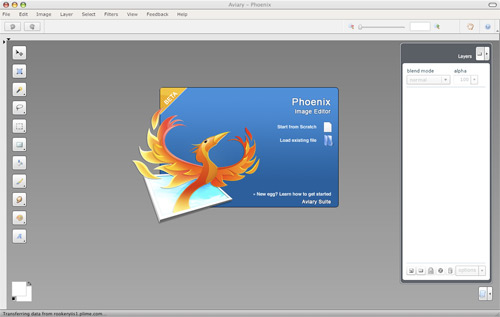 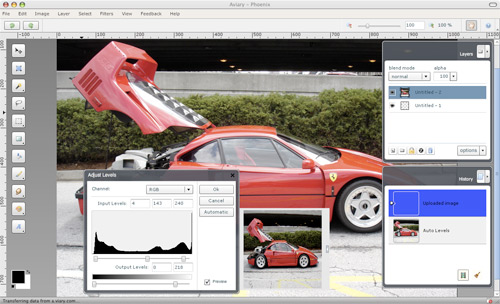 One common concern when using web-based applications deals with speed and performance. How much slower is the application when uploading files and performing actions? With Aviary Phoenix, that's a valid concern and for the most part actions like adjusting levels, brightness, hues and filters were instantaneous on the 10MP image I uploaded. But here's the catch - it seems like Phoenix resized the photo to 1600px by 1071px from its original 3872px by 2592px.

I had a few other nitpicks with Phoenix, such as the filters being overly simplified. For example, when I run a sharpen filter I like adjusting the pixel size and amount. With Phoenix it runs a basic setting that I find too powerful for the images I work with. I also had an issue with auto levels in Phoenix. It doesn't seem to do much of anything when compared to running auto levels on the same images in Photoshop CS3.

Also, I found working with the rectangular selection tool to be irksome. I'm used to using the arrow keys to fine-tune my selection. That didn't work so I resorted to using the transformation tool to move my selection but that just ended up moving the selected image portion itself. Then I went back to just trying the selection tool again and using my mouse instead of arrow keys. It worked. My issue arose from the lack of a hover state displaying a move icon over the selection. I didn't know I could click and move the selection. Small usability tweaks like that would greatly improve various pieces of Phoenix.

Finally, I would love for Phoenix to have a standalone cropping tool rather than relying on people to use the selection tool first.

At the moment, Phoenix seems better suited for basic actions like cropping, levels adjustments and resizing smaller images meant for web publishing. This is to be expected when compared to other products in the space, such as Picnik and Photoshop Express, which all have similar proficiencies. However, that's not to say that this can't be changed by the time Phoenix comes out of beta.

Overall, as a proponent of cloud computing I applaud any effort to create interesting web-based tools and this seems to be the epitome of Aviary's suite of applications. Let me know what you think of Aviary in a comment and I'll send you a beta invitation (until I run out).