Building a community-driven site? You should consider implementing a points system. Why? I'll try to show you why in this post, but in a nutshell points systems are an ingenious way of taking something with no tangible value and turning it into a prized virtual currency of sorts.

Reddit, Slashdot, Hacker News, The Sixty One, I'm In Like With You — all examples of sites utilizing some kind of karma, points or other such reward system without actually offering anything "real." Building a community from scratch is no easy feat. After letting potential users know what the value prop of your community is and why they need it, will that be enough for them to stick around? Maybe they'll create an account and forget about it. Maybe they just don't know anyone else within the community and feel no need to participate in a community with online strangers. How do you try to work around that?

At this point, most community designers turn to implementing something to spur users to contribute and act within the community. Seymour Papert's constructionism learning theory talks about motivating people by engaging them in personally-meaningful projects that help construct new knowledge. Put that in context of a large community-driven website and that indirectly means motivation comes from each users' desire to maintain a reputation as well as earn respect from that audience. This is further backed by Amy Bruckman's assertion that having an audience motivates creation — something that stands out to me with it being the case on my own blog. 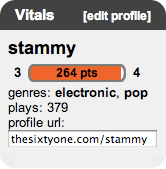 Sounds a bit deep but it really just comes down to letting your users make a place for themselves in the community. From the get-go it is always difficult to hook the new account holder and prevent them from bouncing away for good. One idea is to make it easy to get freebie points, such as for logging in daily or referring friends to the service. When I started using The Sixty One I didn't really care much about the points and was just there for the music from time to time. 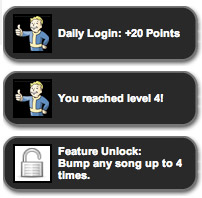 After a few weeks, I started racking up points just from my casual interaction. After referring some friends to the service and gaining points from bumping up songs that became successful, I now use the site more than I would have had I only a handful of points. To make its points system even more captivating, The Sixty One lets users progress through different levels, with each successive level giving the user more capabilities and privileges among the site.

The Sixty One is an example of a points based system where the points are indirectly dealt by other users' actions. That is, you get points if a song you bump up becomes successful when other users bump it up. However, sites with karma-based implementations of points systems have a less reliable (read: takes more work to gain points) system. On these sites, points for each user are directly in the hands of the other users, often by other users rating their contributions or comments. While karma points are harder to achieve and promote insightful user activity, these communities tend to be less effective at luring in the new user who wants to jump right and advance without much difficulty.

I hate to back this up with a World of Warcraft example but it fits: leveling up in World of Warcraft is easier in the early levels and then as the user progresses, it becomes more challenging. This adaptive system encourages casual players to stick with the game instead of turning them away. It boils down to operant conditioning and reinforcement learning. It's easier at first and then it gets harder as the user or player progresses. I'm not saying karma-based systems are ineffective, but they truly only work well in certain situations. For example, karma works well on Hacker News since new users are initially lured there by the interesting content and the karma points users gain after the fact is an added benefit which turns into a complementary form of motivation.

Twitter-able Summary: Points-based reward systems provide users in a community with the motivation they need to quickly become fully-engaged.

Do you participate in any online communities that dole out some sort of points? Do they keep you active in the site or are they just nice to have?

Somewhat Related: The Perils of the Anonymous User