Earlier this week Apple updated the MacBook and MacBook Pro lines. The update wasn't too crazy. Performance got a boost with 45nm Intel Penryn processors (decreased system temps being the main advantage) while the MacBook Pro now dons a multi-touch trackpad and upgraded Nvidia graphics. The only thing not really publicized by Apple is that the new notebooks no longer include the Apple Remote. It's now a 19 accessory. 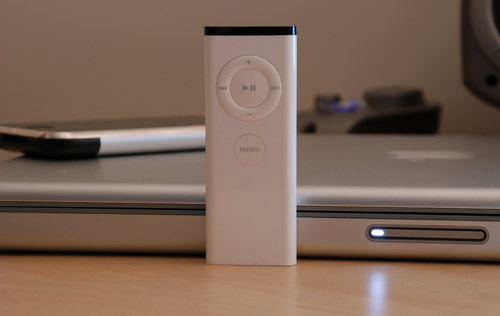 Like how I casually included the MBP and iPhone as part of the same pic?... genius

While Apple's notebooks aren't exactly geared towards media aficionados as are say the iMac and Mac Mini (commonly used in HTPC setups) I still think Apple could have spared a few bucks to include the remote. I for one use the Apple remote daily. Before I go to sleep, I usually put iTunes in shuffle mode and use the remote to forward through songs I don't care for and adjust the volume. It's almost as satisfying as when I had the Sonos system. I haven't even mentioned Front Row usage yet, and that's where the Apple Remote shines. When playing movies the remote comes in handy for quick pausing to hit up the restroom and so on.

It's a shame to see Apple leave out such an important piece of hardware from their MacBooks and MacBook Pros. Have you become fond of the Apple remote too?