With all the hype surrounding online storage services such as Box.net, Amazon has decided to get in the game with their new service S3, Simple Storage Service. Before I go any further, I must say that S3 isn't aimed at the same market as Box.net. S3 integrates well with REST and SOAP interfaces which are things that only developers are familiar with anyways. Amazon has fully grokked what developers want and S3 will be offered with just about any amount of storage as developers require. A possible use would be making a script linked to a cron job to dynamically backup your blog database every so often and save it to S3. Right now I have my database backed up nightly and sent to my gmail account, but S3 seems like a more worthy solution, especially as my database gets larger and will eventually hit the 10MB attachment size limit. 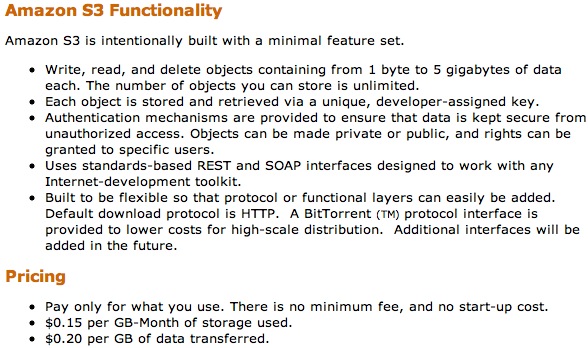 S3 can only be accessed through their API or the mentioned interfaces, making it pretty much in a different league than Box.net. A very nice touch is Amazon's inclusion of the BitTorrent protocol as an alternate method for downloading stored files. This is great if a company has an S3 account and a team of developers needs to access the same file(s), they can speed up the process with a torrent.