When it comes to music, I am a complete maniac. I must have some new, non-overplayed songs to get any work done. That's why I invested in a solid studio monitor setup and that's why one of my screens usually looks like this: 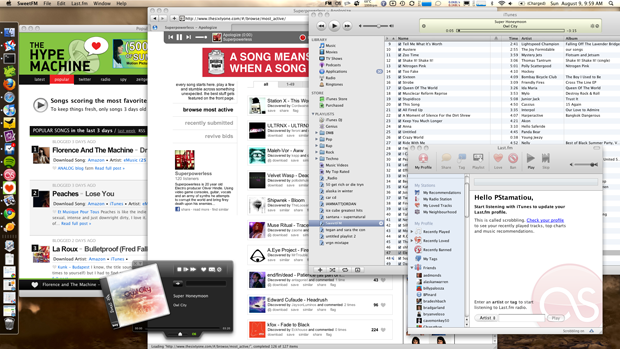 Add to that my propensity to store stuff in the proverbial cloud, and it's no wonder why I'm relying more and more on music websites than actively seeking downloads to put in my iTunes (and it doesn't help that I always have just a few MB left of space on my early-adopter SSD). I used to labor over uploading my music to Amazon S3 via Bandwagon or backing up to Anywhere.FM to be able to access and sync my music from any computer. Now I'm seeing that is the wrong way to go into the cloud. Users shouldn't have to do so much work — downloading, uploading, organizing, and constantly updating.

Enter Spotify. (and if you don't live in the U.S. chances are you already know everything about Spotify.)

That's why I have always been intrigued by Spotify. I've always thought of it as a cloud-based iTunes of sorts. No need to download songs, yet you still have access to a massive catalog of songs numbering in the millions. Songs are streamed and play instantly, even on the sub-par 4 megabit Comcast cable connection I am currently using while out-of-town. Spotify serves up infrequently played songs themselves, while relying on a custom Peer 2 Peer infrastructure to stream popular songs. Spotify claims they are built using 95% open source technology, which seems to imply that their P2P technology is not too dissimilar from BitTorrent, with a twist. It has been said that they begin by streaming the first parts of a file rather than random parts (as with BitTorrent), enabling speedy playback.

According to Wired, Spotify is "the most successful music sharing platform in Europe with more than five times the usage of its closest competitor." That's no small feat either. As for the "catch", there are three plans: a free ad-supported plan, a paid day pass that gets rid of the ads for a day, and a premium account that ups the audio quality to 320kbps (audiophiles rejoice) and has special "VIP" offerings like access to pre-releases and concert ticket lotteries. The free and day pass plans stream music at 160kbps (better than most online streaming offerings of 128kbps, but not quite near CD quality, commonly defined as upwards of 192kbps).

Once you have your Spotify account, here's how it works:

Whenever an overseas friend told me about Spotify, I'd eagerly load up the website, only to be greeted with a banner saying I wasn't cool enough to use Spotify.

Unfortunately, due to licensing restrictions we are not yet available in your country. We understand that you are currently in United States (your IP address 127.0.0.1). If you believe we have made a mistake, we apologize and ask that you please contact us at support@spotify.com.

Well, that depressing banner will soon be a thing of the past for US-based music listeners. Spotify is coming stateside soon and I just got my hands on a US beta invite and have been happily playing around with Spotify for a few days.

Will Spotify be able to replace the myriad of online music sites I rely on for my daily music fix? The short answer is undoubtedly yes.

As usual, you can click the images for a larger version. 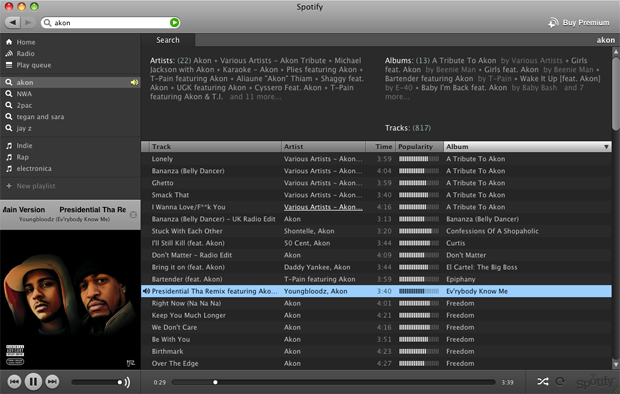 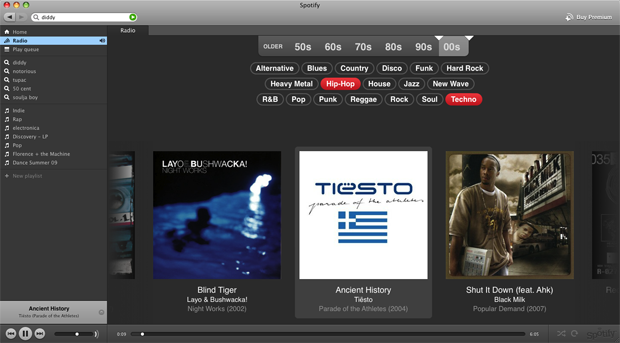 Spotify Radio View - You can sort by time and genre tags. Artists also have their own radio pages (not shown). 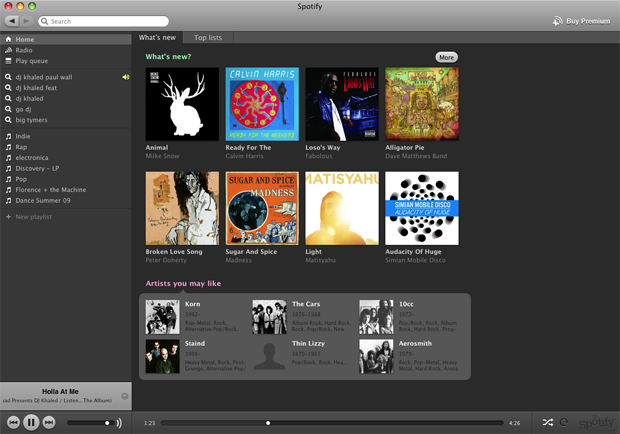 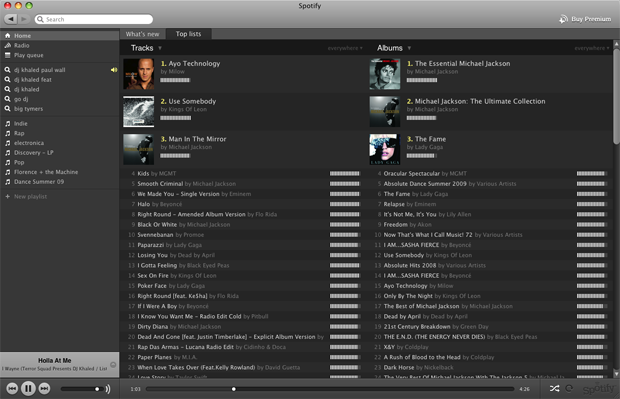 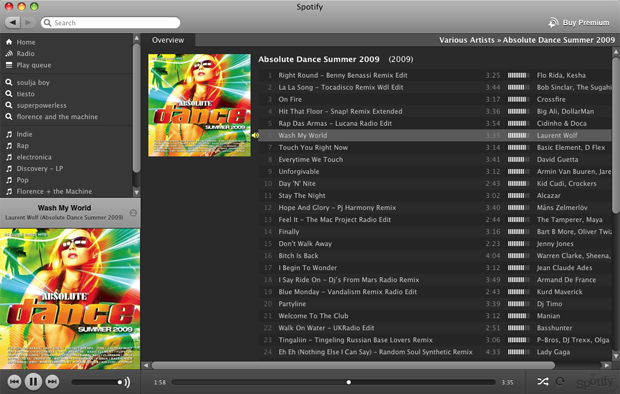 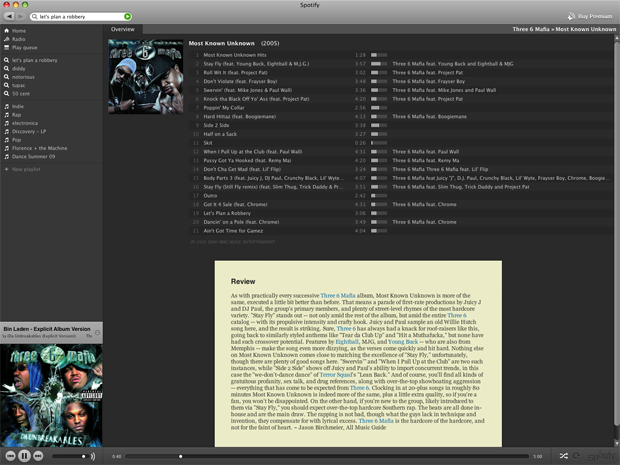 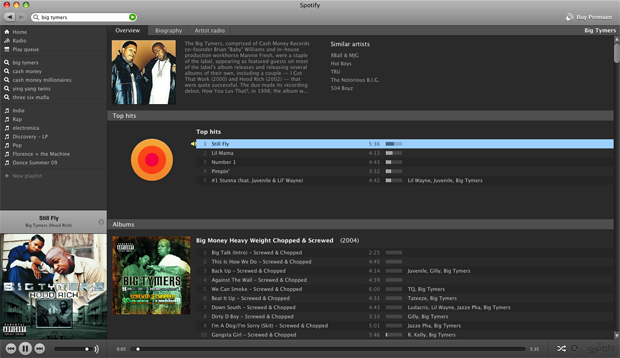 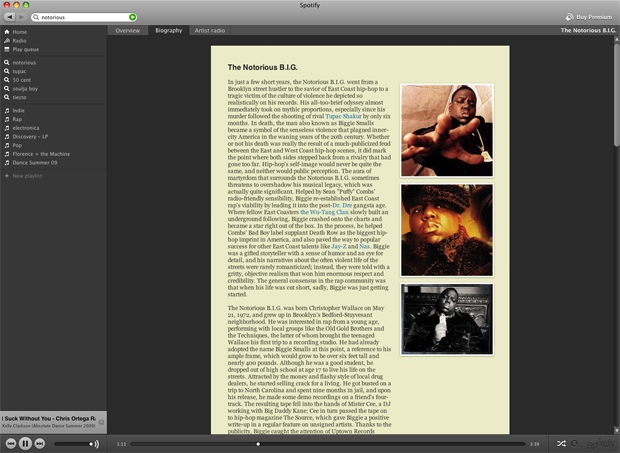 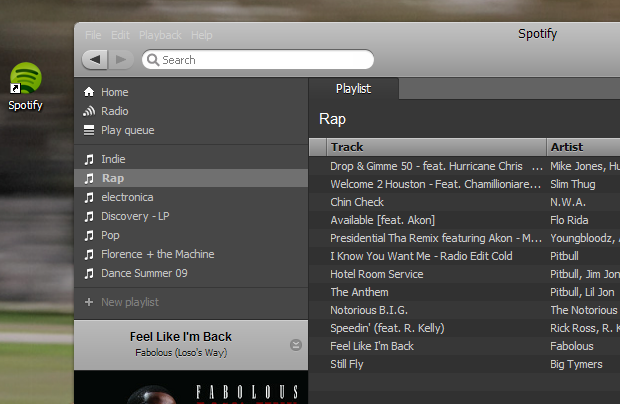 And then I installed Spotify on my PC... without a hitch all of the playlists I created on the Spotify client on my Mac showed up flawlessly 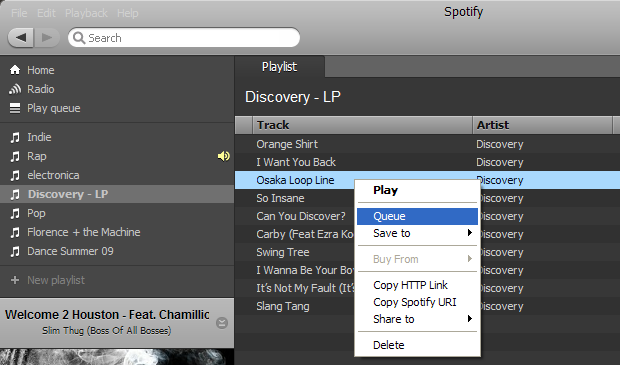 Mark a playlist as collaborative and share the link with friends.. they'll be able to view and add songs to it.

The best part of Spotify's streaming nature - you can share playlists, tracks and albums with other Spotify users with just a link

Okay so you've seen what Spotify looks like and can do. The interface isn't terribly robust or feature-packed at the moment (version 0.3.18) but it has all the features I regularly use in iTunes, with the huge exception of an equalizer. Poking around in the preferences only reveals the ability to change the cache size, add in Last.fm details and enable volume normalization.

Spotify rocks because of 1) a great music catalog, 2) instant plays, 3) the ability to easily share tracks, albums and playlists with a simple URL, 4) good search functionality and 5) all the music at your fingertips with none of the gigabytes taken up on your hard drive. However, Spotify might scare a few people away due to the you-dont-really-own-songs nature of the service that more or less limits playback to the (online) computer. Spotify plans to combat that issue with iPhone (if approved) and Google Android applications that can cache playlists.

However, the biggest drawback of Spotify in my eyes is how hard it is to find good music. Sure, if you want to know what artist or song you want to listen to then you're set. And sure, the radio feature and artist radio feature helps solve this issue to a degree. But I still don't know what I want to listen to. That's why I'm always browsing the popular lists of Hype Machine and thesixtyone or poking around Pandora. Yes, Spotify does have a featured and top lists area of their homepage but it's a muddled highlight of songs from their entire catalog, most of which I find overplayed (like a Black Eyed Peas song that was released over 2 months ago, or the epicly overplayed Kids song by MGMT). My suggestion? That they also highlight users' playlists (with their permission of course) on some area of the application. For example, if you're on an artist page for 50 Cent, it would show off popular playlists incorporating some of Curtis's tracks. I'd like to be able to find like-minded music maniacs and link up with them.

Another suggestion: enable the "popularity" column in playlist view.

Would you pay for Spotify? Yes. I've always been a fan of the subscription model and would love to rid myself of worrying about how much space my iTunes collection takes up. Not to mention how cool it is to share a playlist with a friend and not have them ask me where they can download the songs I'm listening to, or be able to Twitter out a link to a new song I like without worrying about the legal repercussions of sharing an mp3 hosted on one of my servers.

But.. but... I like owning my songs! I will admit that it feels a little weird relying so much on something that could be pulled from under my feet at any moment. I have always been a big proponent of owning my stuff (yeah I know I just said I like subscription models..), which is why I don't yet use Dropbox, and why I regularly backup my data on services that let me export it (currently trying to write a script that I can cron and will nightly archive my pads on EtherPad and ship off to my S3 account... anyone good with curl?)

But in the end, I think this type of thing is the future. Applications are moving from your computer to the cloud, and surely data is the next thing to do so.

Am I the only person that still burns CDs for my car? Yeah, I burn CDs to listen to in my non-iPod-enabled car. I did the whole FM modulator thing and hated the quality, and short of getting a new head unit and amplifier, I'm stuck burning CDs. That's something I can't do with Spotify as I don't have access to the files and pigs will have to fly before the music labels let Spotify put in some sort of CD burning ability in their application.

I live in the US. When can I expect to get a Spotify account? I have no idea (but if their recent funding is any clue.. it's not too far in the future), nor do I have any beta invites at the moment. Sorry! Leave a comment and if/when I do get any invites I'll be sure to email them to you.

Spotify gets 9.5 out 10 Stammys. I'm just waiting for it to get a bit better and then I'll gladly ditch my personal music collection (that I will have recreated with playlists in Spotify).

Have you been using Spotify recently? Thoughts? If not, what provides your music these days? What do you think about the whole subscription and streaming music model?