The iPod accessories market has always been a fierce battleground. Hundreds of manufacturers creating the latest little trinket for you to hook onto your iPod. Only a select few iPod accessories are actually beneficial, do what they say and are worth your hard-earned money. ifrogz is a relatively new company offering rugged, silicone cases for the iPod Nano, iPod Video and the 4th Gen iPod. 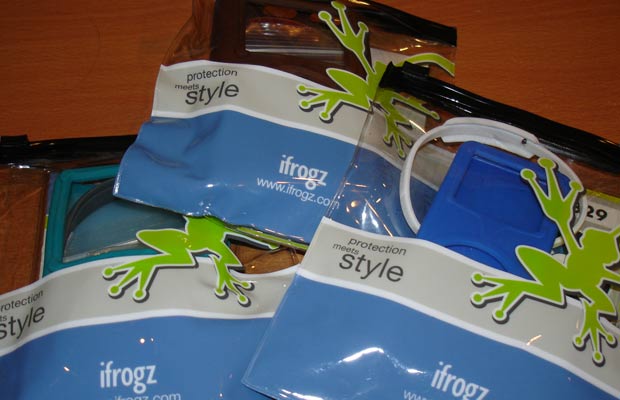 Unlike many other iPod cases, ifrogz cases have pioneered a new frontier of customization. Each case, which retails at 24 USD, is comprised of three components; the main wrapz, a bandz and screenz. You get to choose the color of the wrap and band as well as the style of the screenz, which covers the iPod's scroll wheel. Their website has an interactive flash and javascript system that lets you see what each color combination looks like an iPod. In addition to those three components, a cleaning cloth is accompanied with the package so that you may prep the iPod before applying the protective screen and then the iPod scroll wheel cover. The larger, non-Nano models come equipped with a belt clip whereas the Nano model sports "fins" so that you can attach an included lanyard. 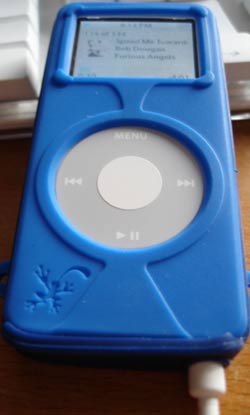 This is the first time I have seen any iPod cases with a multiple component design. The advantage of this is that you can not only create your own case, but have the ability to purchase additional components at a small price. For example, you can purchase extra bandz, if you wish to use alternative colors from time to time, for only 4.

The components are made of pure silicone and treated with an anti-static method designed to resist lint and dust adhering to the surface. I was actually surprised with the build quality. I had been skeptical about a silicone case but it seems rugged. I tested the strength of the wrap by trying to get it to tear by digging my nail into it as much as possible. Nothing happened, not even a mark was left. The soft texture of the case absorbs the impact of a fall rather well, bouncing the iPod around rather than letting a dent or worse damage occur. However, I have a small gripe with the awkward fitting of the band on the bottom of the Nano wrap. Although, I believe this has been fixed with the newer versions of the case shown on their website.

The wrapz has the perfect dimensions and is exactly the right size to show the entire scroll wheel and display. The band goes all around the wrap to keep it snug, only providing access to the headphones jack. This does make it a slight pain turning on and off hold, but nothing too severe. The good thing is that the band provides a tight fit for the headphones jack, which fixes my age-old dilemma of the headphones disconnecting with the slightest accidental tug on the cable. However, due to the size of the hole in the band, fitting non-Apple headphones will be a challenge.

The cases for the 4th and 5th Gen iPod seem slightly more durable with thicker silicone than the Nano case. As mentioned earlier, the larger cases support the use of an included belt clip which is strong enough to latch in your iPod and features a quick-release mechanism. The whole interface is very similar to cell phone belt clips. However, users should take note that the cases for the 30GB and 60GB 5th Gen. iPod Video are identical, the 30GB version coming with a silicone insert to make up for the extra space. While this may seem like a waste, resulting in an unnecessarily thicker case, ifrogz has documented this and says it provides a safer environment for your iPod. 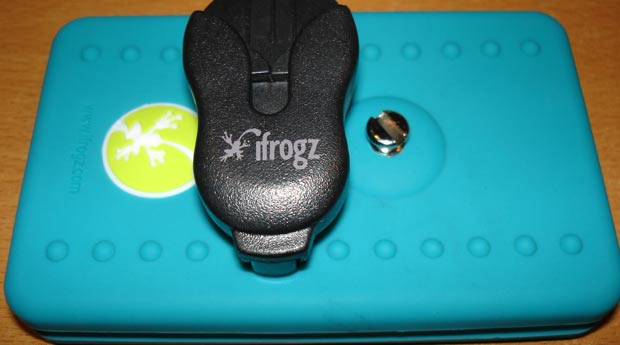 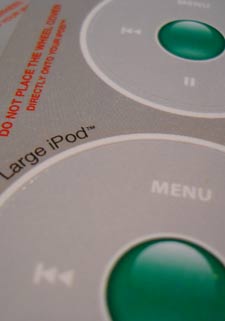 Screenz is a combination of a thin yet protective plastic cover for the front of the iPod and a decal to stylize the scroll wheel. While not necessary for the case to function, screenz can protect the display from minor scratches while adding your own unique touch to the iPod. There are literally hundreds of designs to choose from, with more likely to come. Regardless of which screenz you purchase, two sizes of the scroll wheel screenz are provided - for the Nano and larger iPods. They are essentially decals and can be removed as easily as they were applied.

After testing them briefly, I can assure you that no functionality is lost by putting something over the scroll wheel (track wheel technically). I remember being able to control my iPod in my pocket on the outside of my pants once.

As promised, ifrogz delivered a quality product at a reasonable price. The silicone wrapz and bandz hold the iPod well, absorbing shocks, while the screenz component protects against screen scratches and adds some flair to the scroll wheel. Making your iPod gym or hiking-proof is a great thing. However, this kind of protection comes at the cost of functionality. The case pretty much hogs up everything, only leaving access to the headphones jack. Turning on hold, hooking up your FM radio remote, charging or syncing require slightly disassembling the case. This can become an annoyance if you are an iPod power user.

While the ifrogz cases do a great job of protecting your iPod, they can be too "grippy" at times. Attempting to slip my ifrogz-protected Nano into my jeans pocket before class began deemed near impossible. The case provided way too much kinetic friction to fit in my pocket. If iPod protection is 2nd on your list, with port accesibility and ease of use being first, I recommend you check out a slick case like the Capsule, TuneBuckle or the carbon fiber C6. But if you want a protected iPod and don't want to worry about scratching the case when you drop it, the ifrogz line of cases is for you. Head over to ifrogz to customize your own case.