The last computer peripheral I need to replaced before having a complete Apple setup was my mouse. For many years, I have been extremely fond of Logitech mice. Ergonomics, performance and features - Logitech mice have it all. When the MX1000 was released, I was the first guy in my dorm to get one and have never regretted the purchase. The MX1000 and G5, my current mouse, both use ILDs or Injection Laser Diodes instead of LEDs, commonly referred to as simply "optical" when talking about mice.

Laser mice provide the precision I need when dealing with pixel-sensitive projects in Photoshop and now I only use Laser mice. However, there are a few problems with my Logitech G5 mouse. First off, it's wired and now that I'm using a MacBook, portability is a must, that is being hindered by the need to constantly unplug and plug it in. Even with the MX1000 that is a problem as it uses a big dock. The solution is a wireless mouse that can operate seamlessly with the integrated Bluetooth of all Macs. Sometime last week Apple solved this problem by releasing the upgraded and wireless version of the first multi-button Apple mouse, the Mighty Mouse. 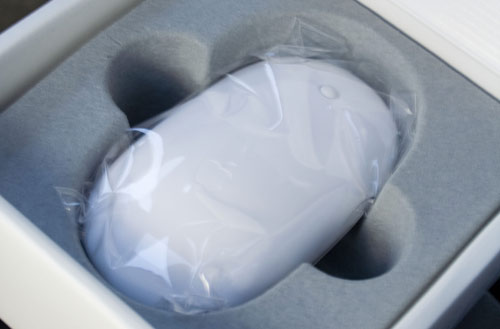 Unlike the wired Mighty Mouse, the wireless Mighty Mouse uses a laser sensor instead of an optical one. It also uses the Bluetooth protocol and does not require any sort of dock or dongle so you can take it from Mac to Mac and mouse around flawlessly. It's powered by two AA batteries, but there is an interesting feature - it can operate with just one or two batteries. Pretty nifty if you ask me - use two batteries for endurance or one for nimble, lightweight mousing. Speaking of batteries, the wireless Mighty Mouse comes with 2 Energizer Lithium AA-sized batteries. The fact that they were lithium was a nice surprise as they should last a long time. The use of AA batteries is also great for traveling; should the batteries die on your trip to Europe, you can find replacements at any convenience store. The wireless Mighty Mouse comes in at a retail price of 69, which is inline with other mice of its caliber. 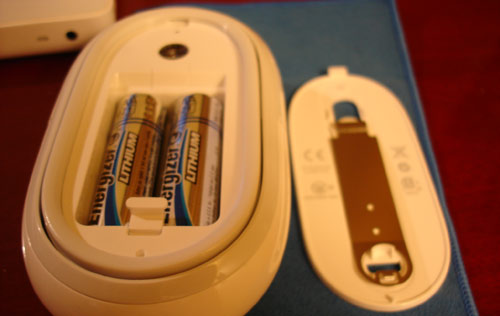 If you've never used a laser mouse, now is the time to start. Mice using laser technology instead of optical are not only much more accurate. Optical mice work by bouncing light off the object you're mousing on and detecting the reflection. With laser mice, the beam that it shoots is much smaller, therefore it can detect more detail in the surface it's on. The result: you can mouse on just about any surface from glass counter tops to steel tables. I know that one of the older, optical mice I had at school struggled with the obscure wood grain patterns on my desk but that's all a non-issue with laser mice. The only bad thing about the wireless Mighty Mouse using a laser tracking system is that you won't be able to get this cool easter egg.

The wireless Mighty Mouse has the ability to left-click, right-click, middle-click and scroll in any direction (if you have set 360 degree mode in Sys Prefs). There is also the ability for one more action of your choice. Through the bundled software you can tie any action, such as opening the Dashboard, to the two squeeze buttons on the side of the Mighty Mouse. While there are two buttons on the side, they only trigger one action. However, I needed to squeeze them with more force than I'd like to get them to "click." You must really have a burning desire to open the Dashboard to squeeze for it. Maybe they'll break in and get easier to squeeze down the line.

With the bundled software, you can customize many aspects of the mouse as well as keep track of its battery life.

Clicks on the wireless Mighty Mouse are strong while providing ample tactile feedback. You will never experience a "did it click?" moment. However, the downside to this comes with the fact that it is a tad loud for clicking. This is not the kind of mouse you want when computing at 4am while your roommate, only a few feet away, is sleeping. In this case, using the wireless Mighty Mouse will get you a pillow to the head.

One thing to be noted about the left and right click is that they are actuated on a seamless top shell of the mouse. Never having used a Mighty Mouse before, I thought that it would be hard to distinguish between a right and left click. Fortunately, none of that was true so when I want to right-click, I always get a right-click. But I have noticed one thing: since the mouse detects clicks via its touch-sensitive surface, it is almost impossible to get a right-click without taking your finger off the left-click. This might be a deal breaker for some. 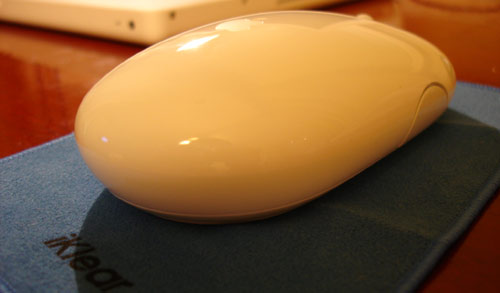 The absolute best part of the mouse is the scroll ball. Yup, that's right - bye bye scroll wheel. The scroll ball, not much larger than a BB, rolls around with exceptional ease. Although, I do wish it was slightly larger as controlling it with any accuracy would be a little difficult with larger hands. I also wish that the scroll ball had some kind of feedback. With most other mice, the scroll wheel has distinctive "clicks" by which you can tell how far you've scrolled.

Apple's wireless Mighty Mouse is far from the massive size and weight of the MX1000 or G5 (the included lithium batteries in the wireless MM are considerably lighter than standard-issue alkalines). The shape of the mouse was one thing I was worried about before purchasing it. I had always preferred mice shaped for right handed users created with thumb-rests as the G5 had. However, after using the Mighty Mouse for about an hour, I didn't really seem to mind the symmetric shape. Compared to most mice, the Mighty Mouse rests low so you are almost using it with your hand completely flattened out. If this is your first time with an Apple mouse, expect some time to get used to it until mousing at your usual proficiency. 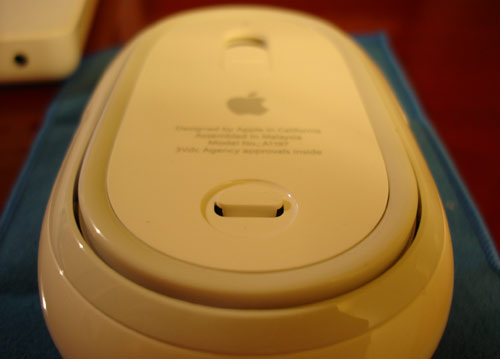 The mouse slides around with ease thanks to the the teflon-like border on the bottom.

More Reasons to Buy It

One of those "this is why I love Apple" features is the power switch on the underside of the wireless Mighty Mouse. When switched off, the laser sensor is fully covered, making it safe to pop in your messenger back and head out the door to class not worrying about scratching or otherwise sullying the delicate sensor. 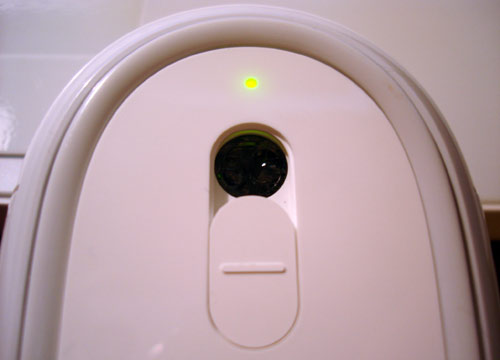 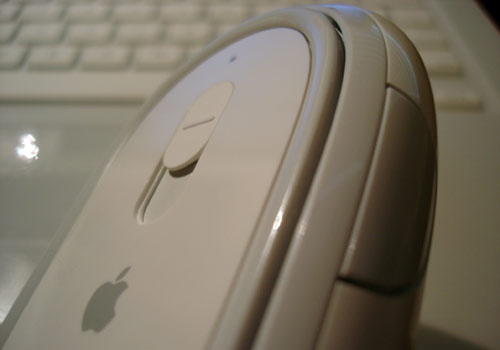 Performance of the mouse is as you would expect with most Apple products - spot on. There is also no noticeable lag when using the mouse energetically.

At 69, Apple's Wireless Mighty Mouse is not for everyone. It is made with mobility in mind and is ideal for MacBook/MacBook Pro users on the run. There's no need for the monotonous plugging in of USB cords as with other mice. For the right person and application, the wireless Mighty Mouse is a solid, well-designed product. Don't listen to what TUAW says in their review.

However, if you're hoping that the wireless Mighty Mouse is the missing link between USB mouse accuracy and bluetooth portability, I hate to say: you'll have to continue on your quest.
TUAW