Have you ever wanted to get more out of your home network, like adding a NAS, without ponying up for expensive hard drives with Ethernet built-in, Time Capsules, Drobos or the like? While some newer routers come with a USB port allowing users to add a hard drive or printer on the network, they are costly and rather limited in their functionality. It was this dilemma that had me pondering a custom solution when I wrote my series about building a cheap and small mini-ITX-based computer with the sole purpose of being a NAS and download box. That setup cost over 200 and required much hardware and software tinkering. For those looking for a cheaper and hassle-free solution, I would suggest the $99 TonidoPlug linux home server, NAS, cloud-in-a-plug... et cetera. 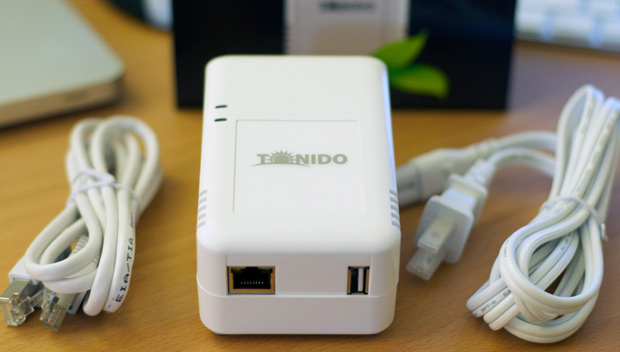 The TonidoPlug falls into a relatively new category of "wall-wart" form factor computers. They are generally defined as being cheap, low on power consumption (in the single watts range) and fanless. Most plug computers, as they are also called, are based off of the Marvell SheevaPlug reference design. The difference between the TonidoPlug competitors like the Ctera CloudPlug, PogoPlug and Globalscale GuruPlug comes down to the bundled software and services. While they all essentially run on the same hardware, each has its own set of pre-installed applications in addition to services (some are paid) that do things like facilitate file and media sharing from outside the home network.

Tonido bills their offering as "an alternative to cloud services and storage." I think Tonido is going after some stiff competition with services like Dropbox and Amazon S3 for file storage/syncing and countless other cloud services for every niche imaginable, that don't rely on cheap commodity hardware that has a much higher chance of failing compared to aforementioned cloud services with SLAs. But I digress; for what is essentially a $99 network-connected Linux box, I couldn't resist taking a look at the TonidoPlug. 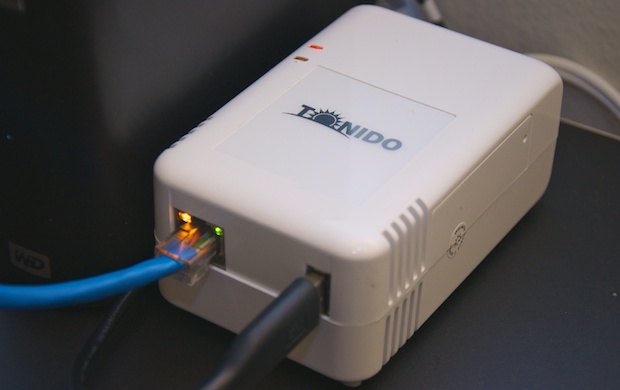 At roughly the size of the last-generation Apple Mac Mini (the new version of which is slick as heck) power brick itself, the TonidoPlug comes with a 1.2GHz Marvell Feroceon processor (ARMv5), 512 MB of DDR2 RAM, 512 MB of flash storage (Hynix NAND using JFFS2 according to dmesg), a gigabit Ethernet port and a single USB 2.0 port (Marvell Orion EHCI). Sorry, no Wi-Fi in this plug computer... though the updated version of the Marvell reference design includes 802.11b/g, bluetooth, a 2.0 GHz processor and built-in hard drive. 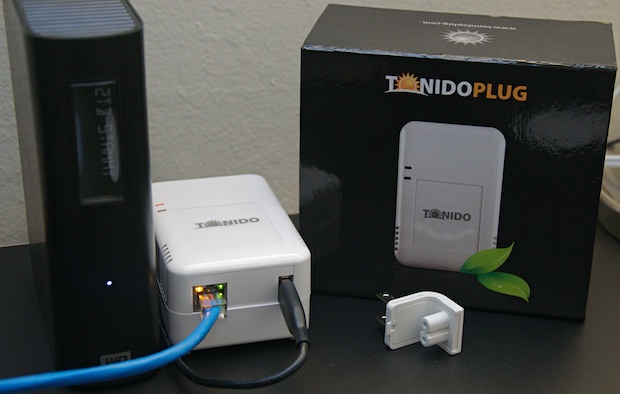 As for power consumption the TonidoPlug has been said to draw approximately 5 to 13 Watts though I cannot confirm without a Kill-a-Watt meter handy. The fanless design is silent at the expense of being warm to the touch, neighboring on toasty when performing a rather large apt-get update. Overall, the TonidoPlug is a nice, simple server I can hide anywhere, such as right on my power strip. 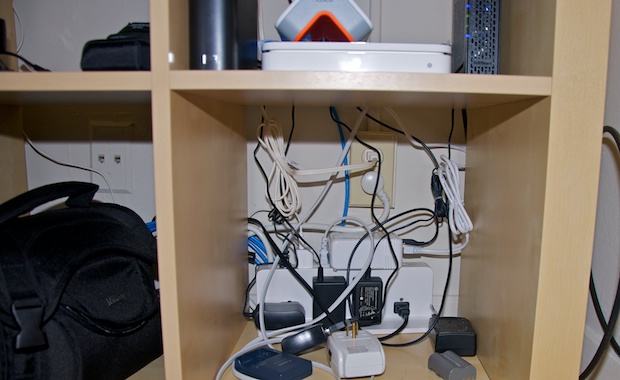 The TonidoPlug nestled away in its natural habitat — the majestic power strip.

Assuming the TonidoPlug is always running near its load (only likely if you were to do something like fold on it 24/7), it would cost 1.42 to run for a month in California (15.22 cents per kW-h according to the DOE).

Like its ilk, the TonidoPlug does not include any sort of monitor or display connector. As a network device and server more than a desktop, the plug computer is meant to be accessed through a web interface (or SSH if you prefer... or you can setup VNC if you must). The underlying operating system on the TonidoPlug is Ubuntu 9.04, but seeing as how users have access to SSH and apt-get (though it is broken right out of the box) this can be user-updated whenever necessary. This is where Tonido shows off what it can do. CodeLathe, the folks behind Tonido, have developed a web interface and suite of applications. The larger goal is to get developers to build other applications for inclusion in Tonido's own app store. Tonido has a well-documented developer platform and SDK out for this purpose. That being said it appears they are still in the early stages of fostering this developer community and the only applications out are ones written by CodeLathe.

Before delving into those TonidoPlug web applications I'll talk about setup. Hardware setup doesn't really warrant a mention — just plug it in, attach an Ethernet connection and USB storage device, be it a USB stick or external hard drive. Software setup is almost as easy. Find the local IP of your TonidoPlug on the network by going to tonidoplug.com/ip then access that in your browser; the URL is usually something like http://[local IP]:10001. 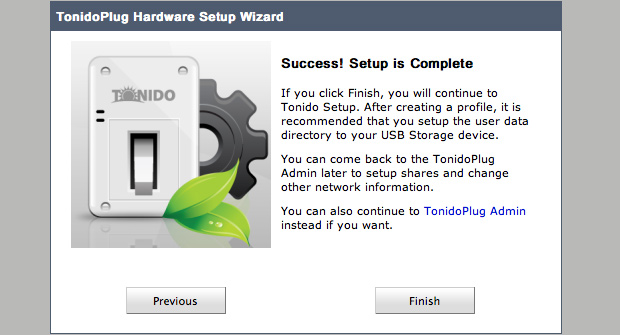 After changing the root password (you use also this for SSH access later on if you so choose) you will be prompted to create a Tonido account. This account is vital to accessing your TonidoPlug outside of the network by simply browsing to your easy-to-remember Tonido URL. That's pretty much it for setup.

There are two main UIs for the Tonido. There is the admin interface that provides control and lets you see the status of hardware, network and storage, and then there is the primary interface for managing applications. You'll spend most of your time in the latter. 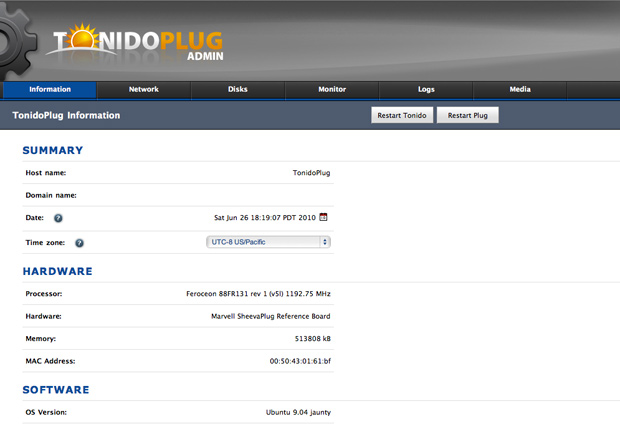 At this point, without any further configuration you can connect to your USB drive on the network. Samba is pre-configured and already running. WebDAV support is also available, but after setting up the included WebsharePro application. This brings me to the next point: applications. Currently the TonidoPlug comes with a slew of applications: 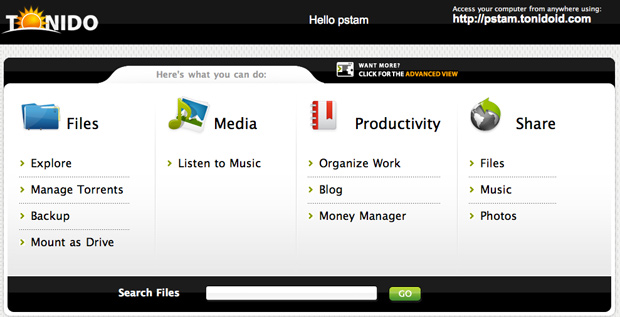 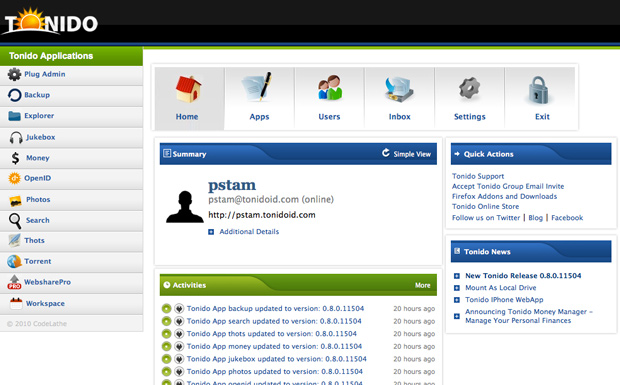 Below are a few screenshots from some of the applications: 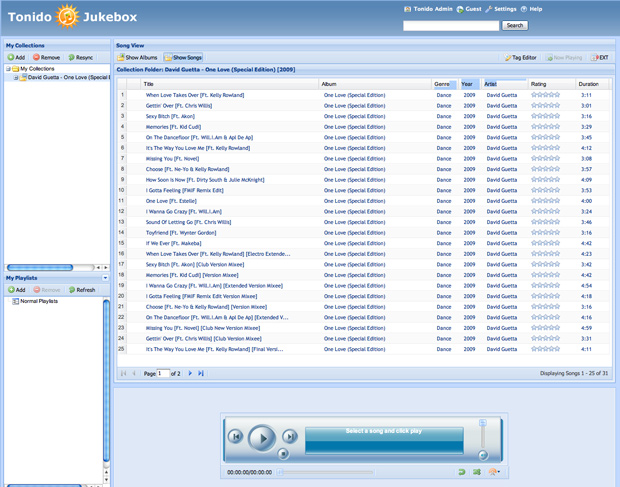 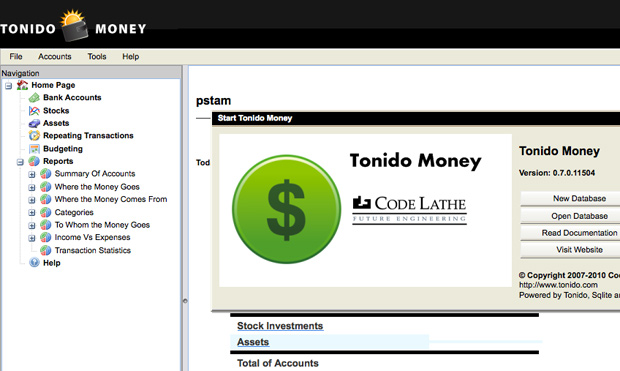 Unfortunately, I have come to the conclusion that all of the included applications would never replace my current usage of other services or applications for their respective utilities. The Tonido apps are all minimum viable products at best and do not compare to other feature-rich web or desktop applications. Even if these included TonidoPlug applications were up to par with other competing cloud services, I would not trust my daily workflow on a cheap piece of hardware that could stop working at anytime and that relies on a home Internet connection that is just as unreliable. The main draw of the TonidoPlug is the Tonido service that lets users access these applications and their files remotely, outside of their network but in the end that introduces another failure point — the home Internet connection. That's where the Money and Workspace-like apps make no sense to me. On the other hand I have no problem using the TonidoPlug to serve up local media files and the TonidoPlug's ability to stream media to UPnP and DLNA compliant devices like the Xbox 360 and PlayStation 3 are enticing.

I could expand on my thoughts but there's no convincing me otherwise. If I am to use a so-called cloud alternative to store my files it would not be in the form of a $99 piece of hardware. I have become far too used to happily relying on robust cloud services like Amazon S3, 37 Signals web apps, my own server for OpenID purposes, WordPress for blogging, desktop applications uTorrent/Unison for downloading and so on. In short, I already have something that does each of the things better than the Tonido apps are meant for. There is one big exception though. Tonido has an app store and more useful applications and innovative TonidoPlug uses could emerge based on new applications.

However, the TonidoPlug is still valuable to me at the moment, despite my disappointment with the applications. Why is that? It's a $99 linux computer that is perfect for small projects. For example, Scientific American asked some MIT and CMU students how they would use such a cheap and small server. There are some great ideas in there from home automation to remote video surveillance or anything really:

8. You name it: Because SheevaPlug uses the Linux operating system and open-source software (both of which can be downloaded for free), it could be a cheap Web server, a source-code repository, a backup server or countless other things. "In general," M.I.T.'s Hutchinson says, "it would be possible to host a lot of different types of services on such a box." 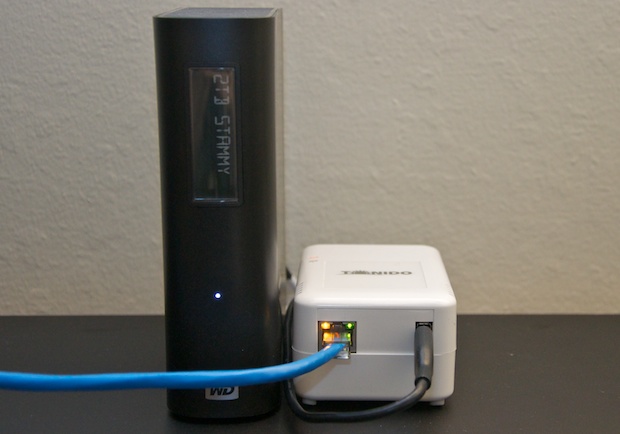 For $99 I would recommend the TonidoPlug to any hardware and software hacker looking for another platform to tinker around with. I'm already thinking about using it to control an RFID reader and some software to manage a door solenoid lock in addition to sending out access alerts via Notifo. However that would be made much easier if this had Wi-Fi built-in like the updated reference design.

The TonidoPlug gets 8 out of 10 Stammys for great value for a small Linux server, not so much for the bundled apps. I will be keeping an eye on Tonido and its app store to see when things change for the better.

What would you do with a TonidoPlug? Would you buy one? Do you currently own any similar network devices or tiny servers?